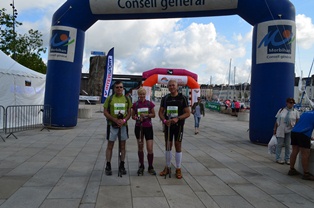 On June 23 2012 accompanied by our friends Benita and Imants we have participated in a 28km Nordic walking competitions in Bretaigne. The route follows the shore of the Golfe du Morbihan – the bay that has about 360 islands (the number of islands depends on the changing sea level). More than 450 walkers have registered to our distance (414 have finished it).

The Nordic walking competition is a part of Grand Raid Golfe du Morbihan. Apart from our distance it features 56km, 87km un 177km running marathon races. Here is more about the event. Although the site is in French you can still get the impression about the event there.

Some photos by Imants, Ilze and Juris Photos

On 20th of June we take a bus to Vilnius where we arrive at 1:30pm – it is five hours till our flight. We use the time for a lunch in airports restaurant. The flight is on time and we land in Paris Beauvais airport shortly after 8pm (French time).

We take a car and get ready for a drive. The navigation application of my mobile does not want to get positioned correctly (it still strolls somewhere near Vilnius) so we use for a while the one of the Ilze’s Nokia. In 10-15 minutes the main navigation system gets back to senses and we reach at 10pm our hotel in Chaumont en Vexin. There is a very narrow gate to the hotel yard, still when we are in there we are welcomed by the note on the board with our names and the room number. The key are in the doors. We have garrets full with interesting interior items.

In the morning we take a walk uphill to the close by cathedral which is impressive, old, moss-covered building. Then after the breakfast in the hotel we drive to Fougeres. The navigation system finds six Fougeres in France, still we manage to select the right one. Initially we drive the road through the tiny villages. Later on though we switch to the faster roads and shortly after 1pm arrive in Fougeres .

Here we get off to explore the Middle age stronghold – obviously the largest in Europe (at least that’s what is seadin a local itinerary :-). The stronghold is huge indeed – eight or so towers built in different centuries (the older one in 12th), high wall all around available for pedestrians. Having walked an seen everything get back to our car and proceed to Vannes, where we get at 6pm. After settling down in the hotel we leave for the old town and the harbour.

Luckily we have get there exactly on a day of the Bretaigne’s music festival. The old town and the quay is full of people. Here and there musicians are performing (in some places you can hear as much as three performances at once), Pink Floid, Creedence Clearwater Revival etc. 🙂 We stop for a while to enjoy one of the jazz bands. The musicians look like lokal peasants and fishermen, they perform great and the public likes it.

Driving to take a look at the start of the tomorrow’s race in village Arradon. The race will start in the very center of the village in a square near the church. We arrive on the market-day when all the parking places are full. The market is full of local delicacies but we have more plans for today so we drive to Carnac to explore the historic heritage. Here we visit the famous sites with more than 10000 Neolithic standing stones (menhirs) hewn from local rock and erected by the pre-Celtic people. The Carnac stones were erected during the Neolithic period which lasted from around 4500BC until 2000BC.

Having seen the stones we proceed to Aurey. Here we walk down the narrow paved streets to the old port and cross the bridge to explore the St. Goustin quarter.

Then we drive back to Vannes and walk again to the quay. It looks different then yesterday. The musicians gone but the Raid golfe du Morbihan has come – a number of tents where we get our bibs (they are put around our arms) and instructions for tomorrows race. We are ready now 🙂

The dedicated for the participants bus takes us to Arradon. Clouds have dissapeared – it is hot and sunny. The church square is full of Nordic walkers. Muffins, cofee and water is served for us. The dark-skinned Nordic walking instructor leads the warming-up. At noon the race is kicked-off and everybody rushes ahead guided by the boys on bycicles. It is not so easy to get out of the main group. When after a couple of kilometers all three of us have managed to do this, suddenly the leading walkers stop and start to move back. The byke boys have misguided us by the wrong path. The race turns into a chaos in no time. The leading and the main group moves one against the other and then they meet like two waves in ocean. We have to start everything over again. No much chance to move back into the leading group because the center of the path is occupied by the competitors while the flanks are guarded (very effectively, I should say) by the blackberry shrubs. Nevertheless we fight out again and soon secure or position among the leading ten walkers.

The route mostly goes by the shore of beautiful Golfe du Morbihan. At times we walk the narrow paved path by the stone wall. The forest paths, pavement, gravel, mud, asphalt, ladders change one another. The final section takes us by the shore of the bay to the port of Vannes. Shortly before the finish line comes the surprise – one has to by it for a hundred or so meters and then come back. And yes – the finish is only at the third gate in a row 🙂

Ilze comes as a first in womens competition! In an overall competition Ilze is the sixth, Imants – the seventh and me – the nineth. We believe our results are superb 🙂 Yet it may mean we should change our plans to visit Dune du Pilat – we have promised to attend the awarding ceremony tomorrow.

it’s cloudy and a little rainy. We laze in a hotel in the morning – having a breakfast, packing our luggage. Then we drive to the port to be in time for the last finishers of the grand 177km marathon. The runners make they way to the finnish as they are able to – who runs, who walks, who limps. An old man is carried by his armpits to the finish line by a younger one. The old one is just moving the legs. The public is giving support to everyone clapping and cheering.

At 12:30pm the awarding ceremony starts as planned. Ilze is called as the first and awarded as a winner in Nordic walking women’s competition. Next to her goes the winner in nordic walking men’s competition. Then the runners are awarded by the age groups and in overall competition. Everybody gets the cups and bags full of local delicacies. Ilze gets interviewed right on the scene. It appears that Latvian women knows not only to walk but to speak French as well 🙂

We do not wait for the end of the ceremony because we have to drive 600km to our next hotel. The weather is exactly as in forecasts. We start in Vannes in a rain and 16 degrees celsius. As we move to the south the weather gets warmer and the sky clears up. Near Bordo it is 27 degrees and sunny. We have fast enough to have time for Dune du Pilat. Dune du Pilat is more than a 100m high and 3km long hillock at the shore of the Atlantic ocean. To see the ocean you have to climb the dune first. The plastics ladder takes us half way to the top, further we climb the sand to the top. The dune is huge indeed – the forest and the ocean is far below.

There are a lot of people up on the dune. Looks like they are to spend some more time here – perhaps to enjoy the sunset. Not we who have to drive still more to the South yo find our accommodation in Mimizan.

When the navigation systme says “You have rached your goal” we can not see around anything like accommodation. After a while though somebody notice an undistinguished signpost. A narrow driveway leads us to the gate of the country-house. The hostess guides us to the guest house and shows the rooms. Tomorrow morning we proceed to the Pyrenees. You can read about this part of our trip here.