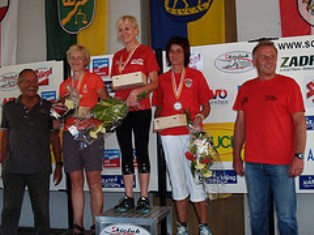 This adventure is not like the previous ones because our goal is to take part in 4th Nordic Walking World championship taking place on 9-11th September 2011 near Austrian city Bleiburg. The discussion on how well-grounded is the decision of organizers to call this event a World championship is out of scope of this story. We have to notice though that the organization of the event was on a very high level. About 150 walkers from 10 countries (Italy, Slovenia, Austria, Germany, Poland, Czechia, Switzerland, Hungary, France and Latvia) have participated. Perfectly marked race trace, exact rules, the judges and everything you need for a good competition 🙂  The Latvian team participated for the first time.

We traveled to Austria by car. We were four – our friends Benita and Imants accompanied us. Ilze, Imants and Juris participated on 10th September in the main (half-marathon) race (21,6km), while Benita selected the 9km sattelite race. We spent 2 days on the way to the championship’s site and settled down in a nice apartment in town called Klopein near the lake Klopeinersee.

Having done with our breakfast we move out to do some short Nordic Walking – about 5km. Later on we drive to search for a starting place of the race – and find it easily. The stadium where the race starts and finishes is located on the outskirts of the village of St. Michael ab Bleiburg. We manage to drive almost all of the track of the race. The major part of the track is the asphalt-covered streets or roads. Still a couple of sections is gravel or woody path. The weather forecast for tomorrow is 27-28 Celsius and sunny. Will be hot 🙂

Our second visit to stadium of St. Michael ab Bleiburg is around 5p.m. We get our bibs and chips and other important things for the race. The opening evening starts at 7p.m. so we use our time to see the Bleiburg – which is a Medieval town if believe to the brochure. Here we by happy accident meet the threefold Nordic Walking champion and record-holder Michael Epp. We use the chance to chat and to take some shots. Then we return to the stadium hall to attend the opening event. The loud music, long speeches and people drinking beer and having fun.

The apogee of the event is when the standards of the 10 countries are brought in – the Latvian inclusive. The feelings are high – no matter that we are here without any support from our homeland.

The weather forecast told the truth unfortunately – when we arrive at the event site it is hot (27C) and a not a slightest breeze. Benita has to start her race at 9.30a.m., the other three of us – at 10a.m. About 30 walkers participate the satellite race, while 132 take part the main race. When moving into start zone the referies check everything – if the poles are of correct length, for example.

The shot of the starting gun throws everybody forward. The group of best walkers takes the lead from the very beginning. The rest follows in a big crowd. The competition is  strong indeed – muscles, long legs etc. The referees follow the race on bikes and stand here and there by the route. The result of their job is two disqualifications and about 10 warnings (the first warning means 60 extra seconds to race time, the second one – another 90 extra seconds; the next comes the disqualification).

Our race results are cheering – the 42nd position for Ilze, 45th for Imants and 49th for Juris. Ilze wins the silver in her age group only about 40 seconds behind the winner (she has the 7th position in female competition).

When everybody has returned from the race there is an awards ceremony. The competitors sit at long tables, eat pizza and drink beer. Winners are called to a pedestal, Ilze inclusive. She gets the medal, flowers, the wood-made box with the delicacies of local producers and compliments..