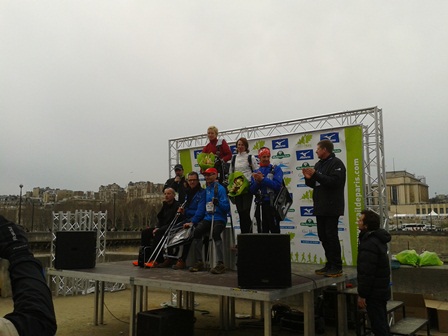 We are participating in 30km Nordic Walking race taking place in Paris on 16th March 2013. The Nordic Walking race is included in the programme of the Paris EcoTrail for the first time. We have taken part in EcoTrail last year as well – still no time control then, just a 30km guided walk.

We have never flown over the white France before. The snow is everywhere you look. A row of six snow tractors clear the lane from the snow. The train to Paris is late for an hour – because of the weather conditions. Cars and motorcycles stand by the streets covered in snow (this is not a big deal if compared to what we see in TV about weather in Normandia though).

Our hotel is located 15 minutes walk from the Eiffel tower. Having leaved there out luggage we take a metro to Quartier Latin to visit Au vieux Campeur  (sportsware shops), stroll a little around and have a lunch in one of Italian pizzerias. A little freezed we get back to the hotel.

We decide to take a look on a place where the Saturday race wil begin. It does not look like a day will be sunny and nice (yet cold). Still that’ s exactly what happens and we have a nice walk for more than 4 hours 🙂

We take a train in a station near the Eifell tower. The train stands here for almost an hour (problems caused by the yesterdays snowfall, we guess) – still it is the only problem we have today. In a 40 minutes we are in Meudon-val-Fleury station and start to go uphill one of the Meudon’s streets to the observatory.

Meudon once was a town (the road signs still today reads Ville Meudon) and only in XIX century it became a part of Paris. The observatory is located near the huge park and here starts Avenue de Chateau. Our race will start here. We walk down the avenue and enjoy the superb views the Siene to the central part of Paris. Somewhere in the half way in one of the large beautiful houses Richard Wagner has lived and created his famous Flying Dutchman.

Further on we proceed through the beautiful park down to the Seine and by the Seine to the center of Paris. On the way we cross the river to Ille St. Germain (the race will go there) and through it’ s park, than further to the artificial island Ile aux Cignes (swans island) and to the Eiffel tower. We complete the walk with a lunch in Piceria at blvrd. Grenelle near Seines.

Off to get the bibs and everything for tomorrows race. Huge tent is set up next to Eiffel tower – exactly like the year before. On a walls outside the tent are the lists of the participants (they say that total number is about 10 thousands, 200 will be our competitors in 32km Nordic Walking race).

We get the participants envelope (bib, train ticket and everything) and some extra accessories. We take a look at the multiple stands inside the tent with goods for runners and walkers. The stands of the organizers of events in Morbihan, Venice etc are here as well.It’s a pity one can’t have everything.

We take everyhing to the hotel and drive metro to Belleville – the unlucky sister of Monmartre (the second highest hill of Paris does not attracts tourists like it’ s lucky sister Monmartre). Still it has something to show. Edith Piaff has came to the world here and Maurice Chevalier started his carrier in Belleville.

We walk up the Rue Belleville and then turn right to the Park Belleville. The park is located on the slope and forms many terraces. There is a wonderful view on the Paris from the upper terrace.

We proceed back to hottel by another (2nd) line of the metro to place Charles de Gaulle and then by 6th line over the Seine and over the blvrd de Grenelle to our Dupleix station.

We take a train to Meudon. The EcoTrail shuttle bus is already waiting at the Meudon-val-Fleury station and brings us to the location of the race start. We are between the first arrivers at the spot but more busses come and soon enough all the place is filled with runners (more than 2000 of them) and walkers (almost 200).

Runners are allowed in the race in several (perhaps 3) groups with a delay of 5 or so minutes between the groups. Nordic Walkers start after the last runners group. The route goes uphill the Avenue de Chateau – the slope is not steep but the avenue is long. The slope is followed by long sections of slippery mud and new up-hills and down-hills. After one of the route curves a particularly long up-hill section shows up. Not much steeper than the Avenue de Chateau it still turns out a real ordeal. As we learn soon enough this is not the only one of the kind.

In a couple of hours we succeed through the muddy hills down to the Seine where the route gets smoother.

We take a metro to one of the largest parks of Paris – Parc de la Villette, that hosts the largest Europes science museum Cité des Sciences et de l’Industrie, three major concert venues and Conservatoire de Paris. The park features as well a pair of large channels and everything for a recreation. Side by side with a huge museum building is located the Geode – a large metal globe with iMax cinema hall inside. To explore the globe from inside we attend a stereo-film about prehistoric monsters (one of them dared to thrust his darling head on a long neck right into our faces).
Next to Geode there is a submarine of decent dimensions – we did not explore it because of shortage of time. Instead of that we managed to stroll a part of the park.

Parc André Citroen) takes 14 hectares near the Seines (in the place of the former Citroen car manufacturing plant) about a halfhour walk from the Eiffel tower. We go there on foot from the hotel. Although still freezy, the spring is coming to the park. We stroll in the park and take a look on a huge hospital George Pompidou. The balloon that frequently takes people up to watch the Paris from the birds view is not there – the season has not started yet.

Having done with the park we proceed to Ille aux Cignes and find below the bridge there a number of interesting bodybuilders. One of them is particularly recreative– the equilibrium has gone somewhere after you move off from the device.