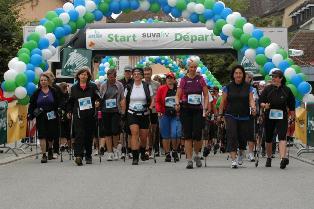 On Sunday 2th September Solothurn (Switzerland) is hosting the worlds largest walking event Swiss Walking Event 2012. If you can read French or German, you can get more about the event here.

The event occurs once a year – this year the 13th time. It has 6km, 10.5km, half marathon and marathon distance, as well as 17km mountain race – Panoramatrail. 3331 walker have registered for the event – half of them for the 10.5km race, but also 488 for half marthon, 61 for marathon and 203 for Panoramatrail. About 2800 of them are Nordic walkers, the rest – walkers. A considerable part of the participants are her not the first time and we had a chance to find out their results. The results are quite enviable. 35 of them have walked half marathon in less than 3 hours. A dozen of them have participated more than 50 and even 100 races. One of the participants is the 68-year old lady, who has made nine 100km running marathons during last 12 years 🙂

Our team (Ilze, Benita, Imants, Juris) have decided to try Panoramatrail. The route is interesting – during the first five kilometers it goes uphill almost a kilometer 🙂

On 31th August 2012 we fly to Zurich where we land shortly before 2pm. Ir is cloudy but warm and no rain.

We get the luggage and go to the railway station. Here we find the ticket machine that accepts the tickets get from the organizers of the Swiss Walking event. The train moves fast and smoothly. After an hour drive we are at the Solothurn central station (Solothurn Hauptbanhopf). It is about 2km walk to our accomodation. On a half way to it we cross the river Aare by the pedestrian bridge and by it’s right bank get to the camping Lido Solothurn. Shortly before we are there it starts to rain.

The hostess guides us to our mobile home – it has small guestroom, kitchen, shower room, when bedroom in the ground floor and other one in the attic. The building is planned to use every bit of space.

We drop our luggage and walk to the nearest grocery to get some food. To get there we follow the road that goes by the meadows and corn fields to the neighbouring village. The narrow road is used by cars, bykers, runners, walkers and we see one Nordic she-walker as well.

Having had a lunch we discuss the plans for tomorrow. We cancel the evening walk because of the rain. Soon it starts to get dark. Hopefully tomorrow the weather will get better.

It rains during the night and in the morning. We take a breakfast, put on the rain clothes and head off to explore the old town of the Solothurn. Solothurn (Soleure in French) is regarded as the most beautiful baroque town of Switzerland – here “(Italian splendour here cohabits with French charm and German pragmatism)” (the citation from the web site of the Solothurn 🙂 ). Solothurn is called the ambassadors town as well because during 16.-18. century the French ambassadors residence was located here. Evernythin is in 11 instances in the old town – eleven cathedrals, eleven towers and eleven fountains. Near the town is the mountain Weissenstein (the Panoramatrail will take us there tomorrow) and Jura mountain range. There are 600km of bykers lanes as well as pedestrian walkways and mountain tracks in the surroundings of the Solothurn.

The old town is not large – about a half kilometer to walk through. It is bordered by the Aare river in the South, and by the walls from all other sides (only parts of the wall have remained till nowadays). The towers are there though for tourists to explore. Should be eleven of them – with specific rounded top.

There is a beautiful Clock Tower in very center of the old town at Markt Plaz (market square). When the clock rings the stone characters come to life – one is waving the wand while other two are ringing the bells. We find the number of fontains and churches as well. It is surprisingly warm inside the Jesuit church. The church is luxorious. The organ is located at the very top at the ceiling. The organ is pompous as well – all in marble. The The Reformers church is ascetic instead. The organ is at the front part of the church. The largest (and the most famous) is the cathedral of St. Ursus. We ascend it’s tower. The rain has stoped and we can look at the pictoresque old town from above as well as to the other parts of Solothurn and the mountains were we are supposed to climb tomorrow. Across the Aare river the Solothurn central station stands out. It looks like (is) architecture monument as well.

Having get tired from the walk we drop in an Italian restorant at the river bank to have some spagetti. This ends the todays programme – we get to our camping to recreate for tomorrow.

It still rains during the night but rain stops in the morning. We get to the events village – there are seven huge tensts (each about 500sqvm.) and several large rooms in the nearby building. We ge the event’s t-shirts and everything for the race in one of the tents and examine the new (next seasons) exel poles in another. Other tents feature wardrobes, cafes, massage rooms, jewelry deposit etc.

The first group of the participants of the Panoramatrail (about 100 persons) are taken to the Obersdorf village in two busses. Imants notices in the buss one of the races favorits – leo from Switzerland. We met Leo last year during the World Nordic walking championship in Austria.

Everybody gets out in Obersdorf and proceeds uphill to the starting place of the race. Here we accumulate in a small parking place near the start line and get ready for the race. The referee shoots the start and everybody moves ahead. The route follows the asphalted toad for the hundred meters or so, then turns off to the gravel path and starts to go uphill. Leo is at the head from the very begining. Ilze and Imants is in the leading group as well. Still the path goes up and up and it gets harder and harder. Of the nujo.lv team I manage to get uphill as the first. Here the path goes plain but the path is covered by fog and one have to walk carefuly to understand where it goes.

After a 6km of walk I notice the sign-post telling that this us the highest point of the track. Full with delight I almost loose the correct path. Still I grasp the problem and get back to the route. Here the downhill section od the race begins that turns out to be harder than the uphill one. One has to walk down by the narrow path full of slippery stones and roots. Later on comes the mud and other extras as well.

On a way down I start to hear from time to time the steps of Ilze and Imants behind. After a while I take a wrong path and loose some half a minute while get out on the track again. I proceed down by the roots and stones down to the flat section of the route. The legs feel soft in the knees – luckily this feeling dissapears in a while. Then comes one more section uphill, then it goes through one of the main sights of the Solothurn – the Verena gorge. After that the track goes by the Solothurn streets and ends by the old Clock Tower. The finish is unusual as well – the racers were directed through the narrow ribbon delimited lanes. When in the far end of the lane the referee tears off the bib’s lower part and scans it – the result is recorded.

Ilze, Imants and Leo are here at the finish – somebody has already frozen. We greet each other. When Benita completes the race we stay for a while at the finish line to greet other finishers. Both the children walking with their parents, and the participants of the very solid age.

Debauch in the evening 🙂

Day 4. By mountain ridges round the Velchenrohr

In the morning Benita and Imants set off to Solothurn central station to start their way back home. Ilze and me take the road to the railway station Solothurn West. We have selected a route with an inviting title – by mountain ridges round the Velchenrohr. Velchenrohr is a mountain in a ridge next to Weissenstein. We are going there by train – first to Obersdorf, then by the tunnel through Weissenstein mountain to Gansbrunnen. Today the weather is warmer then yesterday – it is not raining and sun appears through clouds from time to time. We find at once the right path and start to walk uphill. It is not easy at all after the yesterday’s competition (we experience later that descending is even more fun – calf muscles and knees does not agree with this exercise). As promised in itinerary the path soon takes us at the ridge.

Further on we walk the ridge from one mountain to the next. The last section of the route goes steep down the Wolfenschluht (the wolfs gorge). The gorge is long, narrow and winding with vertical rock walls and rocks at the sides. One can see ahead only up to the next rock and it is tempting to think that the gorge ends there. Still the next rock follows, then more and more. We walk about an hour till the gorge suddenly ends.

Our plan for today has a problem – the itinery planner asserts that there is no buss today from the village we plan to finnish out route. To make sure we drop by in the local tourism office with the question. They tell us – yes there is a bus at the time we request. For safety I ask – is there bus today? It turns out that no – today there is no bus 🙁 Means we have to customize our route.

So we go to Obersdorf again. We walk the route, of the Sundays competition. We walk slower and see more 🙂 Rock walls at both sides of the path for example. When up to the ridge we can see the panorama that was not there because of fog on Sunday.

We get by the ridge to he top of Weissenstein. Here starts the planetu path. The build in stone and metal represents the Sun. On the planet path Mercury, Venus, Earth, Mars and other planets ar located at the distances pro rata to the real ones. It’s a short distance to the Earth. It takes hours to get to the Pluto – it is located at the summit of Stallflue – the far end of our route.

On a way to Stallflue we aascend first to the 1450m high Hasenmatt. The most of the route is forest path going steeply uphill the ridge. There is a stunning view from Hasenmatt and Stallflue to the valley and river Aare.

We descend by the other side of the Stallflue to the town of Lommiswil. The train stops here only on request. There is a large red button on the stations platform. If you don’s press it – you may as well stay here.

This ends our trip to Solothurn. Next morning we take a train to Zurich airport and fly to Riga.