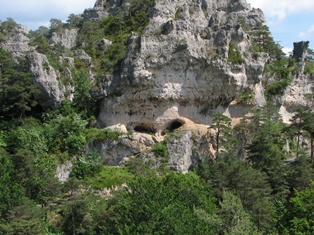 The previous trip to Pyrenees was great, so the decision go again was not a hard one. This time we selected to go in summer just before the start of the season. As we found out the high season starts at the end of June and lasts until end of August.

We managed to find out a way to get there in Pyrenees without night in Stansted airport. The solution is to fly Monpellier via Frankfurt (Haan) airport. Ryanair again. The way back is as usual – Pau to London to Riga. We obtained track descriptions and items we missed the last time – the second pair of tracking poles and a raincoat.

As a place for the main stay we selected Sr. Lary Soulan town 20km from the Spanish border.

Our jet lands in Montpellier at 8:30pm on Wednesday 11th June 2008. We go to Herz office in airport and get Opel Corsa with 1,2l engine. Our hotel Balladin Superior is nearby, we find it easily. They take advance payment 🙁

We get up at six. The day starts with a handful of surprises. Waiter asks the number of our room several times, we did not manage to find the cutlery. When we select the table with a thundering sound the large chunk of the ceiling falls down on the nearby table. The waiter does not loose his temper though. We neither. May be the breakfast is shorter as it might be if the ceiling was still in it’s place 😉 Having finished with the breakfast we pack our baggage and move on to our first destination – Mont Aigual. Mont Aigoual ir the highest mountain (about 1500m) in the region. On the top there is an observatory. As we jump out of the car we notice the chilling wind. Still after the warm weather of Monpellier we did not bother to put on a warn clothes. That’s a pity – we are cold and back soon.

Next we drive forward to explore the subterranean river Bramabiau. There we find ourselves in between everything for tourists – restorant and souvenir shop. There are only several guided tours per day – the next one is scheduled after an hour. We used to time to have a lunch. When done with the lunch we walk around km to where the guided tour must start. The guide suggests raincoats and they are of use indeed because water comes down on our heads frequently while we are in the cave. We are guided through the cave that follows the river. The cave is iluminated and we can enjoy the cliffs of different colours, stalactites, something that is presented to us as dinosaurs footprint  and  the line in the cliffs, that shows where the seabed was some millions of years before.

The next place to experience is called Montpellier le Viex. One can see a number of cliffs of amazing forms. The wierd forms have been designed by the wind. One can see here the cliffs like crocodyle, camel etc.

We decide to look at the Millau bridge (Viaduc Millau)  that is some 20 km away. The Millau bridge is constructed recently (opened at 14th December 2004) and is the highest bridge in Europe. It spans the Tarn valley near the town of Millau. The bridge has seven pylons, tallest of them (up to the masts summit) is 343m high which makes it taller than the Eiffel Tower.

We drive in the parking place nearby one of the pylons. This is large parking place dedicated for tourists that get there to gaze at the bridge from below.

After we have enough of the bridge sights we drive to Gorge du Tarn (canyon of the river Tarn). The canyon is about 90km long, our plans are to experience some 30km of the lower end.

Our hotel (Les Detroits) stands near the river some 5km from the Malene village. The hotel is built on a narrow chunk of land taken away from the mountains.

Day 3. By the Tarn river

We drive to Malene. The village is squeezed between the river and cliffs. One of the tourist attractions here are trips down and up the river on a canoe. The canoes are like they were back in history when they were the only means of transportation here (the river side road was built only at the beginning of 20th century. You can hire the canoe near the bridge in Malene.

Still we decide to walk and we start our journey by crossing the bridge. We have planned our trip as an easy one for a couple of hours. But instead of this we loose our track and spend exhausting 8 hours till we are back in Malene. Friday, the 13th…

Nevertheless the second half of the track is really beautiful. The track goes high in the cliffs by the Tarn river. When we drove by the road on the opposite river side it did not appear to us that there might be a track – but there is one!

The saddest moment of the day is when our hotel appears before us – in the opposite river side. This means nothing more than – we still have some 5km to walk till Malene. We get there only at 6pm totally exhausted.

Still we decide that it is too early to go to bed. It starts to rain but we drive to Point Sublime. This is a hill at the lower end of the Tarn canyon and there should be stunning sights to the canyon. The sights are not as they could be because the rain does not want to stop. Friday, the 13th…

We get up at seven and drive by the river side to village of Vignes and to Point Sublime again. Before the Vignes inside the river bend on a steep cliff there is a sightseeing platform. This stands just in front of the far most place we have reached during yesterday effort. There is a staircase to the platform and yes – it is not free of charge.

The sun shines when we are in Point Sublime, we have the marvellous view at the Tarn canyon. And we have the bus with tourists that enjoy the sight as we do.

Next we drive one more time to Millau bridge. This time the plan is to cross it. This makes a blood run a little bit faster – the bridge runs about 300m high above the valley. There is a large parking place before the bridge – mainly dedicated for the tourists who come for sightseeing. The paved path goes from the parking place to where one can view the bridge best. We go there with the crowd of others to see and to take photos. The meadows around are scattered with red poppies. Perfect.

Then we drive across. Three lines run in each direction, it is easy to forget the 300m below – one can not see them.

This makes an end to our experience in Gorge du Tarn. Further our way goes to Albi (the St. Cecile cathedral – the largest  brickmade cathedral in Europe), then to Cordes sur Ciel (sur Ciel means in the sky – this is a charming small village on top of the hill full of narrow streets, artist workshops and old houses, the main street goes stright up in the hill) and then to Pyrenees. But this is another story.